Mary Park (1852-1931) was the sixth child and fifth daughter of Robert Park (1817-1870) and Anne Scott (1821-1899). Scott McCrone has her journal or autograph book. It makes for very interesting reading and while there are many relatives featured in it there are also many others, probably local friends and neighbours. There is a page of autographs and the rest of the book is filled with pictures, newspaper clippings, crests and contributions from her friends and family.

There is a preface that takes the form of a poem written by Mary and signed as Mary Park, Hatton, 8th April, 1874. There is an entry by K McHarrie 15th April, 1874; possibly Catherine Park, Mary’s sister, who married John McHarrie in 1871. There are many entries some of which are dated; the dates fall predominately in the period 1874/75. However there are notable ones from later dates: To Mr John Scott on his marriage day, 26 July 1877 signed by Agnes C McLintock (descended from Peter Scott/Mary Brock) is a clever poem; in 1883 a poem ‘Snowdrops’ written by J.G., Skelmorlie Castle 1883, this is John Graham (1797-1896) of the wine importer W&J Graham of Oporto, John Scott’s employer (see Scott story). 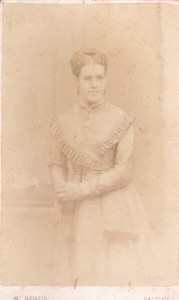