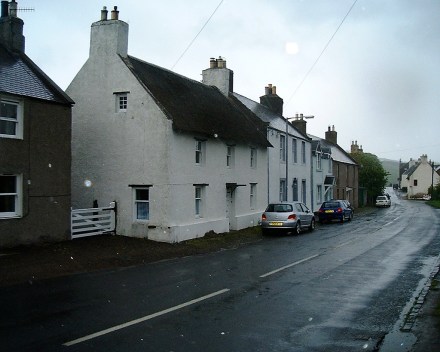 On Whitsunday, 1710 William Wauchope granted a rental right to William Sweet for the property now known as Mertoun Cottage. This was for nineteen times nineteen years which would be until 2071! This same rental right includes the following reference to “William Sweet gardener in Town Yetholm has built upon his own proper charges and expenses an tenement of houses”. This refers to William building Sweet Holm (now known as Nicholl’s Cottage) on which he set out the orchard there, across the road from Mertoun Cottage where there are now allotments. The implication being that William built Sweet Holm some time before 1710. The Disposition quoted below ties together Mertoun Cottage and Sweet Holm. Assuming he was perhaps thirty in 1710 his birth date would be around 1680. He married Jean Tully who was born in 1683 in Jedburgh and a daughter of Mark Tully; Jean died sometime between 1766 and 1771. 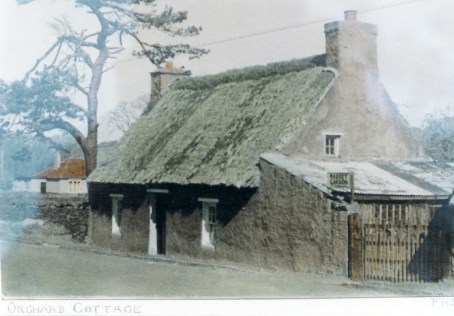 Jean Tully and William Sweet were married in Yetholm on November 6th, 1719. Together they had three girls and three boys:

Grizel Sweet, [I have no birth date] who married Robert Turner; a tailor in Yetholm. They had three daughters and four sons.

Jean Sweet [I have no birth date] who married Frances Wilkinson; a weaver in Yetholm.

William Sweet [I have no birth date] who married in Lessudden

Robert Sweet [I have no birth date]

The family tree  is constructed from those mentioned in William’s will, only Margaret and George have their births recorded in the Old Parish Registers.

William Sweet senior appears to have purchased the land of three quarters of an acre for £15 and laid out the garden at Sweet Holm (in his will there is mention of the ‘yard converted to a garden). He died in July 1766 and his widow, Jean, died after him but before 1771. According to court papers, Grizel looked after her parents in their old age; I imagine this would be from 1758, when her brother took over the property with his disposition (see below), until her mother died sometime between 1766 and 1771. Grizel apparently kept a little shop and had six surviving children aged between 3 and 13 years while she was also caring for her parents.

William made a will in 1755, George his son presented a disposition in 1758 taking over the property; William died in 1766. [This is notable as normally the property would go to the eldest son. However in the papers submitted by Grizel and responded to by George, the eldest son, William, appears to have been successful as he paid an annuity to his father of £40 per annum. As for Robert, he was mentioned in the will but I have no trace of him.]

The disposition refers to the property as follows:

George Sweet, who took over the property, was a gardener or servant at Nunraw, the home of Major Dalrymple and at the time of the assignation of the property he was a gardener at Albake, Swinton where his governor was a Mr McCormack.
George married Ann Lyon who was born at Easton, North Shields on 16 Nov 1721. Together they had ten children; the first three christened at North Berwick, the fourth at Garvald followed by two at Simprin and finally four in Yetholm. This concurs with George’s gardening jobs at Nunraw, Swinton and latterly, Yetholm.

James Sweet born 13 September 1756. This may be the James who farmed in Spittal Farm, Rutherglen (referred to in the article in Scottish Gardener and Northern Forester.) and appeared to expect to inherit Sweet Holm. From the 1841 census, James had retired to Bridge Foot, Kelso with his wife Margaret aged 60. He died in 1845 at Forth Banks, Newcastle.

Thomas Sweet born 28 August 1758. He left for Glasgow and purchased a burgess as a weaver in 1785. He was also a merchant and then latterly the Quartermaster for the City of Glasgow from 1810 until his death in 1848. He married Katherine Robertson in 1787.

George senior died about 1809, probably Anne died before him. He left the property to his daughter Jean Sweet who had married Archibald Hogarth in 1807. Jean died between 1841 and 1851 but Archibald lived in Sweet Holm until his death in 1862.

The property passed to Jean’s niece, Anne Sweet, in a disposition dated 18 March 1825 and not presented until 1853. Anne Sweet was the youngest child of Thomas Sweet; he had left Yetholm for Glasgow in the 1780s. Anne was born on 27 June 1801 and married her cousin Robert Sweet, born in Shilbottle on 19 June 1835. Anne’s brother, Thomas, who died at age 19 refers to Anne as living in Yetholm from 1821, some 14 years before her marriage. In the 1841 census Robert and Anne are living in what is now Mertoun Cottage, so I suspect they lived there from their marriage, Archibald and Jean being in Sweet Holm. It may be that Anne was living with her aunt Jean from 182, perhaps acting as a housemaid,  and this may be why the property was left to her.

The 1841 census records Robert as a gardener. There is evidence to suggest that his shop was located in Mertoun Cottage. He was obviously an accomplished gardener as in the Caledonian Mercury, Saturday July 16, 1842 there was an article recording the first exhibition of the Yetholm Horticultural Society with Robert Sweet appearing in the prize list : For the best cup of Green Pease to Mr Robert Sweet, Yetholm – for the second best ditto, Mr James Shirra Gibb. There are several references to his prize-winning each year. Also Robert is mentioned in two reports of the Yetholm Horticultural Association annual shows as having raised the seeds which produced extraordinarily large turnips in 1851 for George Shirra Gibb, tenant of Lochtower, as well as producing the seeds in 1847 for Seedling Potatoes, raised by himself, of the kidney species, having the very extraordinary number of one hundred and twenty seven potatoes attached. So he was clearly at the forefront of developing varieties of seed.

Catherine Robertson Sweet born on 2 May 1838,

In 1853 the family sailed from Glasgow to Adelaide where they farmed at Sweet’s Cottage near Strathalbyn, South Australia. According to an article written by my Great Grandfather, Alexander Sweet (1843 -1921) of Cathcart and published in the Scottish Gardener and Northern Forester on August 8, 1908, he makes reference to the family having been in Town Yetholm for two hundred and eighty years (which would be 1570 -1853) and with Anne and Robert going to Australia, this ended the Sweet link to Yetholm. I have found a number of Sweets in the 1680s but I have not yet found where they fit in my family tree but certainly none as far back as 1580!

Prior to leaving for Australia, an auction was held to sell their crops and gardening implements as well as their household possessions. The advertisement brings to light a little bit more information about their lives. The auction included crops in the ground (Wheat, Oats, Pease, Turnips and Potatoes) and numbered 8 acres planted. This is more than the area of the orchard and I suspect that he rented some fields next to the orchard which are shown on maps of the period. Also the house (now known as Mertoun Cottage) is described as a dwelling-house, shop, six stalled stable and granary. The shop has been occupied as a Grocery, Seed and Meal shop for the last sixteen years. This ties in well with the Pigot’s directory (mentioned above) in 1837 listing him as a shopkeeper and dealing in groceries. I have still to find the connection to the linen and drapers reference!

Border Sweets, as yet no connection proved:
George Sweet and Jane Rankin had a son, Walter in 1673 in Hawick.

Mary Sweet had a son named Robert in 1776 in St Boswells.

If you would like a family tree in diagram form, please contact me with the name of the family in which you are interested and I will send you the tree.