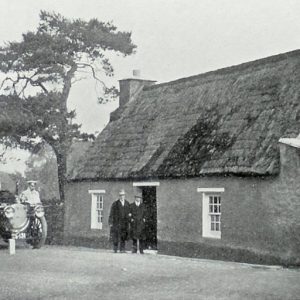 Sweet Holm circa 1909 by Charles Sweet.

The property of Sweetholm in Yetholm had been feu’d to William Sweet by William Wauchope in January 1709. William assigned it to his son George in 1758 on his death and George in his turn bequeathed it to his daughter, Jean.[2] This latter disposition caused a family rift as James Sweet, the eldest surviving son, appeared to expect to inherit the property. When this was not the case he stormed out of the will reading, never to be hear of again.[3] Jean subsequently left the property to her niece Ann Lyon Sweet who was born in Glasgow in 1801.[4] Ann married her full cousin, Robert Sweet in 1835. In Pigot’s directory of 1837, Robert has a linen draper’s shop and was also a dealer in groceries. In the 1841 census he was described as a gardener in Yetholm.

In August 1853, Ann sold the property to Robert Turner, a surgeon in Yetholm, who in turn some years later “sold it to the late General Wauchope of Niddrie, after having been in the family for two hundred and eighty years”.[5] Ann and her husband Robert along with their four children left for a new life in Australia.

Ann and Robert left Greenock on 2nd October, 1853, arriving in Adelaide on Tuesday 17th January 1854. According to the Glasgow Herald of the time, the weather on that day was “ to take up, for the sky was bright and not a drop of rain fell…” This was perhaps a break in the weather as “Last week the wind and wet came together most perseveringly” The temperature was about 50 degrees F but on arrival in Adelaide they would have experienced much greater temperatures.

The ship in which they travelled, “Anne McLean” a barque, built in 1852 at Ardrossan, was 320 tonnes and registered in Greenock. The master was Mr McGow and was heading for Swan River at Perth, Western Australia. According to the Harvey History[6], the Sweet family were in a cabin; they and three other passengers disembarked at Adelaide.

I have no record of the voyage but quoting from an account of a similar voyage undertaken in 1838 by the sailing ship “Fairfield”, Harold J Stowe wrote “Matthew Rankine, a passenger of nine years at the time, wrote in his published reminiscences in 1903, that privateers were said to infest the seas, and one day a strange vessel bore down on the “Fairfield”, and when within hailing distance, demanded to know who they were. Captain Hall, one of the passengers, made answer that they were carrying convicts to Australia…The intruder stayed within sight of them for three days before moving out of sight. It was never known what this vessel was.”[7] It is possible that the voyage of the Anne McLean may have run similar risks.

Why did they leave?

The Sweets were members of Rev Robert Shirra’s congregation. He seceded from the Established Church in the 1840s and was a part of the Associate congregation. The church joined with the United Free Church in 1852. Perhaps this was enough to encourage them to leave.[8]

South Australia, to where they emigrated, did not take in any convict transportees and the local authorities acknowledged that they needed immigrants to improve the development of the territory. They employed agents to recruit candidates from the UK and possibly this was how the Sweets heard of Australia. It may have coincided with poor performance of the market garden and shops run by Robert.

Nearby Strathalbyn had been settled largely by Scots immigrants from 1839 onwards. [9]It is possible that the Sweets knew some settlers in the area and so chose Woodchester where land had become available.

Although Robert Sweet and family arrived in Adelaide in 1854, the ‘Strathalbyn History Room Volunteers’ confirmed to me that it was not until April 1863 that Robert bought the land for his farm from a Mr. Morris Marks; Mr. Marks had bought the land from the S.A. Government in 1853. Robert was described in this purchase as Farmer, Woodchester, so he was clearly in the area, perhaps renting a farm. The family must have settled in Woodchester some time around 1860 as Jane Sweet, his daughter, applied to become teacher in Woodchester School which opened in 1859. Russell Sweet of Sydney has speculated that they may first have lived in an area called Hindmarsh, now a suburb of Adelaide. (See Northern Forester page). There is a reference in the S.A.Gazette for unclaimed letters in June 1863: Robert Sweet, Sweet’s Station, near Adelaide, perhaps this is a clue.

The property known as Sweet’s Cottage in Woodchester is on Section 1813, Hundred of Strathalbyn, South Australia. It is 172 acres of land fronting onto the River Bremer. Robert died in 1866 and so only farmed the land for three years prior to his death. His widow, Anne, lived on there until immediately before her death in 1879. It is possible that Robert’s partner, Alexander McDonald, now married to Jane Sweet, Robert’s daughter, continued to operate the blacksmith’s shop and farm while Ann, Robert’s widow, lived there. The farm was sold to Mr. Robert Forrester on 27 Nov 1878 and was subsequently bought by the Hassam family in 1881.

During a visit to the property in 2015 I met Don Hassam, a descendant of the Hassam family, who owned the property from 1881 until 1984. In the book “Old Woodchester” by Eric Cross he refers to William Hassam “inheriting money, he bought land at Woodchester with Section 1813 as the home block ’Morton Grange’.[10]Marian Harvey and her siblings bought the property in 1984 and still hold it; I met Marian when visiting the property.

Mary Shirra Sweet of the immigrant Sweets married Marian’s ancestor, George Sturgeon Harvey in Sweet Cottage in 1864 when she would be 23. They lived in a property called Rose Hill in Callington; we also visited this property. George and Mary followed their sons to Western Australia in 1904 and lived in York outside Perth. George died in 1920 at York and Mary died in 1921 and is buried in the Weslyan Cemetery in York, W.A.[11]

Ann and Robert Sweet are buried in Callington Cemetery, near to Woodchester, their headstone is badly worn, however we managed to decipher the inscription as:

The grandchildren were born to Jane Hogarth Sweet and Alexander McDonald (see below). William died ten days after his birth in Jan 1868 and Edith, born in 1874, died in 1876.

Robert Sweet and Alexander McDonald had a blacksmith partnership producing hauling chains, wedges, bogies and paling knives.[12] Russell Hassam, son of Jack Hassam said “The blacksmith building which includes an in-built rain water tank was probably already there [I assume he means when the Hassam family bought it] also the large long thatched straw shed which was home to house the cows, horses, carts and hay. There is a stone barn and it is not known when that was built; it had wooden floors and was used by the Hassam family to host Woodchester barn dances, fundraisers and various functions until the Woodchester hall was built in 1941. The dairy was built onto the barn by Jack Hassam.” It is unlikely that these buildings were built at the time of Robert Sweet but these may have been built on the location of pre-existing blacksmith buildings etc.

Alexander McDonald married Jane (Jean) Hogarth Sweet in 1865, he was 13 years her senior. Alexander’s first wife, Ann Paterson, died at age 46 in 1864 leaving one son also named Alexander McDonald. Jane who was the school teacher in Woodchester resigned when they married in 1865.They lived at “Newton Farm”, Red Creek (a property we viewed). Mary, one of their daughters, was also a school teacher and became the second wife to Mr. Berry Smith, a local prominent businessman. Alexander and Jane’s son, Robert Sweet McDonald, bought a vast tract of virgin bush and named the property Preamimma; Jane died here in 1911. The uncleared part of the property was donated in 1936 to form the Ferries McDonald Conservation Park near Strathalbyn. (The property is now called Bromley).[13]

Russell Sweet gave me a copy of a letter from Mary Wilson Dunn Sweet (1871-1959), residing at Craigshields in Skelmorlie, Ayrshire, Scotland. Written in 1942 to Flora McDonald a daughter of Robert Sweet McDonald with references to suggest that there was a frequent correspondence between the families. This is confirmed in another letter, this time from (Robin) Robert Douglas Grant to Russell in 1982 which refers to Mary corresponding with Robert Sweet McDonald until his death and then with his widow and her daughters. In 1928 Robin travelled to Australia to work on Robert McDonald’s farm, for about a year.

The Woodchester school where Jane taught was opened in 1859 with a James Berry as the teacher. Jane took over from him in 1860 and taught there until her marriage in 1865. The pupil numbers fluctuated in that time from 22 in 1861 to 35 in 1865. James Berry had moved to nearby Callington School.

John Sweet married Rebecca Argall Jacka. He was a saddler[14] and died in 1919. John had an unfortunate accident as reported in South Australia Chronicle and Weekly Mail Sat 1 May 1869

A serious accident occurred at Calling-ton on Wednesday afternoon to a young man, named John Sweet, a farmer, living near Hartley on the Bremer. It appears he had been at the mine with a load of firewood with six horses and a waggon, and after unloading had stayed a short while at one of the houses in the township, and on starting home the horses bolted. Sweet was thrown out, the wheel passing over his leg below the knee, smashing it in a frightful manner. Dr. Wilson was quickly in attendance, and rendered all assistance possible under the circumstances. It is from this line that Russell Sweet of Sydney is descended.

Click here to view the chart for the Australian Sweet family 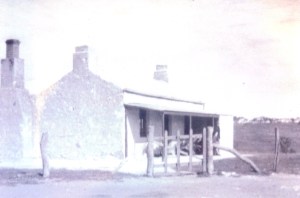 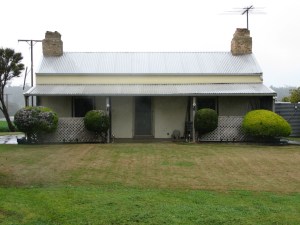 [1] Variously spelt as Sweet Holm, Sweetholm or Sweetholme. This is the cottage that is now known as Nichol cottage see page 185 Bygone Yetholm. The photo was taken by Charles Sweet (1864-1945) in 1908 and features Alexander Sweet and Mr Elliot of Clifton, Morebattle.

[3] The Scottish Gardener and Northern Forester August 8, 1908; an article written by my great grandfather Alexander Sweet “but finding house, orchard, and fields were left to Aunt Jean, he banged up, declaring to his wife, “Come awa’; we’re a’ put to an outside but na her!” He lived to a good old age but we have failed to trace his final residence”. In fact, in the 1841 census there was a George Sweet living at Bridge Foot, Kelso.

[4] Jean’s brother, Thomas (1758 to abt 1848), had moved to Glasgow and married Catherine Robertson (1770 to 1832), daughter of John Robertson of Plantation and Ann Lyon Sweet was one of their eight children.

[5] The Scottish Gardener and Northern Forester August 8, 1908. The property transactions do not go as far back as two hundred and eighty years, this would suggest the Sweets owned this property since 1573. I have not been able to substantiate this. However, Russell Sweet found that in 1710 William Sweet had a rental right for (what is now) Mertoun Cottage and perhaps this right was exercised some time previously. This property is across the road from Sweetholm and is still occupied.

[6] The Harvey History: a family history of the Harvey family in Woodchester

[11] The Harvey History: a family history of the Harvey family in Woodchester