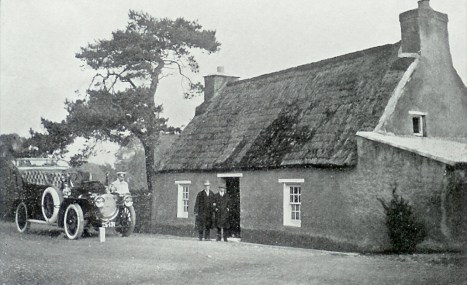 The above photograph was taken by Charles Sweet, a professional photographer from Rothesay and nephew to Alexander Sweet who is in the photo; the one on the left of the two gentlemen at the doorway.

On page 185 of “Bygone Yetholm” this same picture is reproduced with the legend that the “vehicle was owned by Mr Elliot of Clifton Park, Morebattle and it is stopped at the Nicholl cottage, near the south end of Town Yetholm. The date on the back of the photograph is 23 September 1909”.

This raises the questions of why was Alexander Sweet at the cottage when the Sweets had left in 1853? Why bring Charles Sweet, the professional photographer and his nephew, from Rothesay to take this picture? Who is Mr Elliot of Clifton Park and what connection was there to Alexander Sweet? Sweet Holm was renamed Nicholl’s Cottage when it was taken over by the Nicholl family in the 1900s.

My “shaky” conclusion, based on the evidence below, is that Alexander Sweet visited Robert Henry Elliot of Clifton Park because of his pioneering work in farming perhaps for an interview for the magazine Scottish Gardener and Northern Forester, of which Alexander was an editor,  and Charles came along to take photos for the article. Probably the person in the photograph is Thomas Robert Barnewall Elliot as Robert Henry Elliot, his father, would be in his seventies at the time and as seen below, Thomas was a car enthusiast. But why outside Sweet Holm? Robert Sweet (1798-1866), who was living in Mertoun Cottage, across the road, and whose wife, Anne, owned Sweet Holm and the gardens behind; her aunt Jane Sweet who was married to Archibald Hogarth lived in Sweet Holm. Robert tended the orchard, ran a market garden and was described as a seedsman in the 1851 census. It is just possible that he provided seed  to Robert Kerr Elliot (1806) of Clifton Park and so a relationship existed which Alexander Sweet came across on his visit to Robert Henry Elliot, Clifton Park, son of Robert Henry Elliot, which prompted him to visit Sweet Holm. A very tenuous link! 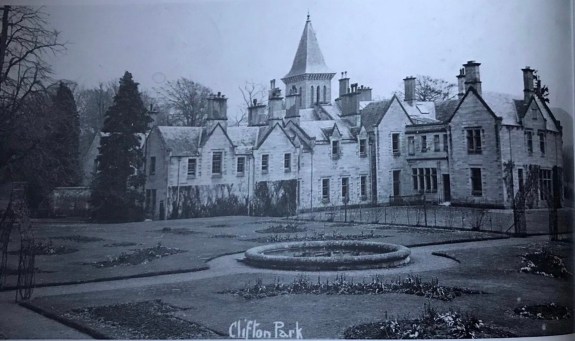 The above photo is copied from “The Country Houses, Castles and Mansions of Roxburghshire” by Bernard Byron with the following legend:

This house was built in 1846 by Robert Kerr Elliot who was an early British coffee planter in Mysore, India and author of books on plantation life in Mysore and on farming in Scotland. He formulated what he called the “Clifton Park System” which was formulated before the widespread availability and adoption of man-made fertiliser and is still applied by many growers today. The right hand block of the house was completed in 1874 by Robert Henry Elliot to the designs of architects Peddie and Kinnear, The mansion was the former home of Thomas Robert Barnwell Elliot who owned the first motor car in Scotland, a three and a half horsepower Panhard which he imported from France in 1895…. The Elliots sold the property in 1950 and unfortunately it nowadays stands roofless, unloved  and abandoned.

From “The History of Morebattle and District, 1966” there is a useful reference to Robert Elliot of Clifton Park.

In the late 19th century, Linton Parish again produced a pioneer of agriculture in the person of Robert Elliot of Clifton Park. Elliot lived at a time when farmers were in financial difficulties because industry and the industrial outlook were regarded as all important. The country had been flooded with cheap imported food  and supplies of cheap cereals and oilcake for livestock. Artificial manures were ‘in’ and constantly pressed on the farmer. Imported seed of vastly inferior quality (especially grass and clovers) was sold to the growers, untested by any official body, and an indifferent Government gave little state aid for agricultural education and research.

Elliot, therefore, chose one of the poorest farms on his estate for use as an experimental station (Clifton-on-Bowmont). His policy was based on what he thought were two essentials – ploughing and sustained soil fertility. He believed that the latter could be obtained by what he called the lea (or ley) system of farming. A ley is a field sown with a mixture of grasses and clovers to form a sward for a predefined number of years. Elliot used the four – year ley, and incorporated it into his rotation system. He was exceedingly interested in scientific farming and experimented with all types of grasses. He raised his voice frequently in the newspapers in the cause of State – sponsored agricultural research, and of State control over the sale of seeds. In his book “The Clifton Park System of Farming”, emphasising his firm belief in deep-rooted plants and in leguminous ones to revitalise tired soil, he declares ‘ The cheapest, deepest and best tillers and drainers and warmers of soil, are roots’.

Source: The Country Houses, Castles and Mansions of Roxburghshire by Bernard Byron

Robert Sweet is described as a seedsman and gardener and had been mentioned in reports of the Yetholm Horticultural Association annual shows as having raised the seeds which produced extraordinarily large turnips in 1851 for George Shirra Gibb, tenant of Lochtower, as well as producing the seeds in 1847 for Seedling Potatoes, raised by himself, of the kidney species, having the very extraordinary number of one hundred and twenty seven potatoes attached. So he was clearly at the forefront of developing varieties of seed that may well have been of interest to Mr Elliot of Clifton.

They had one child, Robert Kerr Elliot (10 Oct 1806), at the time, William, his father, was a Lieutenant of 23rd Regt of Welsh Fusiliers, residing at Mosburnford.

Robert Kerr Elliot married Mary Ann Clifton (born 1808, died 1871) on 3 January 1833. She was  the daughter  of Charles Claud Clifton, residing at Taymaur, Parish of Llanfrynock, Brecon, Wales. (Named as Margaret Ann in “”The Cumberland Pacquet”; born at sea). Together they had nine children:

Thomas Robert Barnewall Elliot (c1871-1949) of Clifton Park, Kelso. Bought the 7th automobile imported to the UK and the first in Scotland.

1896 Purchased his second car. It was purchased from the Daimler Motor Syndicate and was similar to that of Evelyn Ellis. The car had iron tyres and could average 7 mph.

1923 Elliot wrote ‘”I was the first person to own and use a motor car in Scotland, and about the fifth in England. I imported direct from Paris (and first used it in this district on 27th Dec. 1895) a 3.5hp Panhard car: weight, one ton; iron tyres; tube ignition; tiller steering; no radiator. It carried four and had a hood. Speed up to 12 miles per hour; but on steep hills three of the four passengers generally had to get out and walk. On 19th March 1896 I was fined 6d. and 19s. 7d. costs at Berwick for not having a man on foot walking in front of the car. Modern motor cars could only be used legally after Nov.1896, but I ran 1200 miles before this, including a trip to the Highland Show at Perth; the police for this trip undertook not to prosecute unless compelled to do so in the event of any accident being caused by me. The car cost £235 in Paris and cost £10 to bring here in a large wooden case. I sold the car in 1896 and then got in England a 4hp Daimler.”‘

If you would like a family tree in diagram form, please contact me with the name of the family in which you are interested and I will send you the tree.